Telomere Timebombs: Defusing the Terror of Aging, is about a revolutionary and simple way of thinking about aging and health.

Written by telomere and telomerase expert, Dr. Ed Park of Orange County, California, the concepts in this simple but revolutionary book are so clearly presented that a fifth grader would be able to explain them back to you using simple analogies such as firecrackers, queen bees, and Volvo automobile repair.
Dr. Park graduated from Harvard University in 1989 with a degree in Biological Anthropology.  He earned his MD from Columbia University, College of Physicians and Surgeons and his Master of Public Health degree from Columbia, School of Public Health in 1993.  He is an author, speaker, and the world’s expert in the area of telomerase activation medicine.

Telomeres are repetitive DNA sequences located at both ends of all chromosomes.  Telomeres are responsible for maintaining the integrity of our DNA.  They play an essential role in cellular division and aging.  Every human cell contains 92 telomeres which act as biological ticking clocks.  Each and every time our cells divide, these telomeres get shorter.  When one becomes critically short, the cell either stops functioning properly or dies.

But there is a cure for this erosion called the telomerase enzyme*, and it is built into every single stem cell in your body. You see, stem cells are like queen bees that need produce many thousands of worker drones, so a stem cell always needs to add back telomere length to prevent premature damage and death.

*Telomerase is an enzyme that maintains telomere length in order to prevent cell senescence and death. (Senescence means ‘old and dysfunctional’.)   The gene producing telomerase is normally turned off in most cells.  Because the telomerase gene is active in our stem cells, it adds new DNA onto the ends of telomeres, thus lengthening short telomeres and protecting the stem cells.

Working like an old stock ticker tape machine or a modern label maker, the telomerase enzyme adds back more length to your stem cells’ telomeres, preventing DNA damage from occurring in the first place.

Does this sound like science fiction? Well, not according to the 2009 Nobel Prize in Medicine that was awarded for the discovery of how telomerase repairs telomeres and keeps us young and healthy.

In 2007, Dr. Park became one of the first twenty people in the world to regularly ingest a supplement called TA-65, a molecule discovered by scientists to be a telomerase activator. It transformed him so profoundly that in 2008, he became the first medical doctor licensed to prescribe TA-65. Since then, hundreds of physicians and tens of thousands of patients have jumped on board with amazing results and no adverse effects.

How can a supplement do all those things? Because there is only one way all your stem cells stay healthy, and that’s telomerase. When we increase the activity of telomerase, whether it be by lifestyle choices or by taking a nutraceutical, good things happen. Sound too good to be true? A sin against nature or god?

Why not think of it as car maintenance? You are just changing your oil and replacing old parts. There is a real man in New York who has maintained his Volvo for 3 million miles. Is the Volvo corporation going to strike him down with a lightning bolt? No! They love him!

Every day, cutting edge scientific research is proving how this Telomere Erosion is causing aging and virtually every other disease we will face. 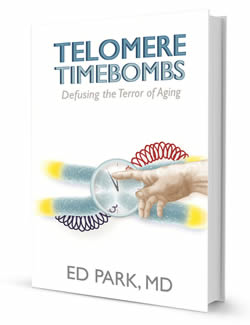 Dr. Park has created a stem cell theory of aging that is the basis of what he practices, something he likes to call “telomerase activation medicine.”

This fresh, fascinating and often funny book, Telomere Timebombs, will teach you why we get old and sick, describes the journeys back to health and youth experienced after taking TA-65, and outlines a future in which telomerase activation medicine has changed all you expectations about getting old.

Thanks to the efforts of many pioneers before you, there is a safe and natural technology to restore abundance to your life.

Let Dr. Park explain why aging has now become a choice. After reading Telomere Timebombs, you will be armed with the tools to choose wisely. And you too will soon look forward- to going back and doing thing right.

For more on this exciting, revolutionary topic,
order your copy of Telomere Timebombs today.